After learning the basics of technical analysis one can only get acquainted with the terminology of technical analysis for technical analysis is a vast discipline of study. More you learn, more you would feel the need of learning. The point being, there are too many theories, concepts, assumption and interpretation that you will never find a point where you can claim that you know everything. Therefore, the key to learning any new concept is to grasp the elements which matter the most. In the context of technical analysis, you have to understand the concepts which will have a direct effect on your day-to-day trading.

Let's advance to the next level of learning technical analysis. 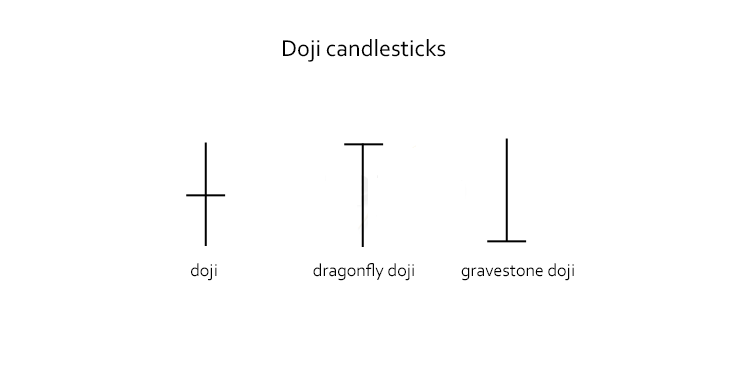 The doji candlestick pattern happens when the opening and closing of the stock is virtually the same. A doji is a reflection of intense tag-off war between buyers and sellers. The buyers don't let the price fall and the sellers don't let the price rise. In this scenario, the price moves up and down but closes near the point of the opening which forms a doji pattern. A broader interpretation of a doji is a trend reversal. Whenever a doji appears in an uptrend it can be interpreted that the current trend is about to reverse and vice versa. There is also a dragonfly doji which looks like 'T'. It carries the same significance as the regular doji. 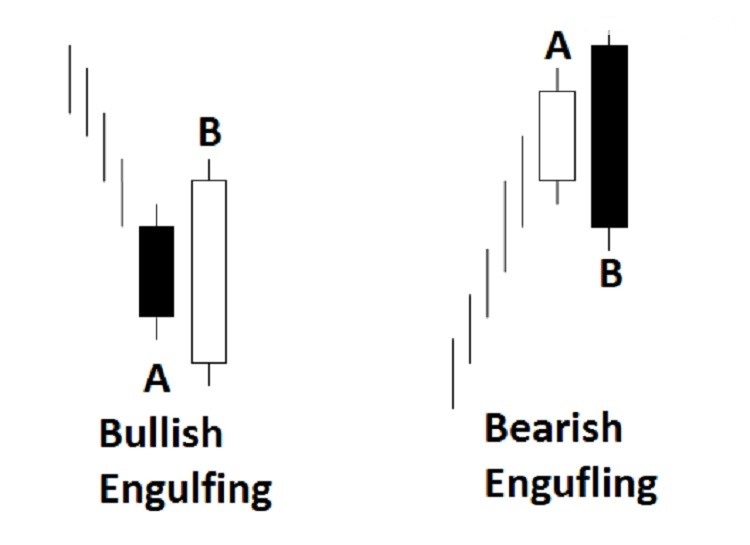 Is a bullish reversal pattern. A morning star pattern happens over a course of three days if you are using a day candle. The pattern consists of three candlesticks - a long-bodied red candle that signifies the current downtrend, it is followed by a short middle candle that opens gapped down (this one looks like a Doji) and the third candle is a long-bodied green candle that opens gap up and closes above the midpoint of the body of the first candle. This is one of the most reliable reversal patterns in the technical analysis. The point to remember here is that for this pattern to be relevant, it is important that it happens at the end of a downturn.

Exact opposite of morning star is the evening star. In this pattern there is a long-bodied green candle that signifies the current uptrend, a short middle candle that opens gapped up and the third candle is a long-bodied red candle which opens gap down and closes below the midpoint of the body of the first candle. Like in the morning star, this pattern can only be trusted if it happens at the end of an upturn. 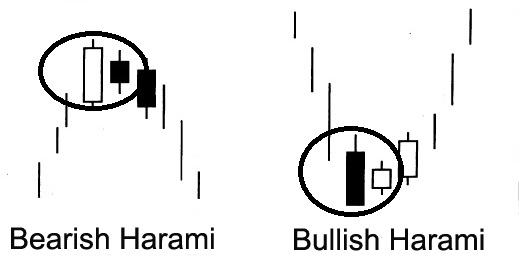 Harami is a Japanese word. It means a pregnant woman. The Harami pattern builds over a period of 2 days. It has long candle followed by a small candle of the opposite colour which appears in the middle of the body of the previous candle. A Harami pattern is both bullish and bearish. The harami pattern suggests that the uncertainty has crept into the market and the reversal might be around the corner.

There are many more candlestick patterns like Hangman, Hammer, inverted hammer, etc. You will understand these pattern gradually as you go along learning technical analysis. The above mentioned are some of the most important patterns which are regularly used by the professional traders.

Let's look at some of the most prominent chart patterns. 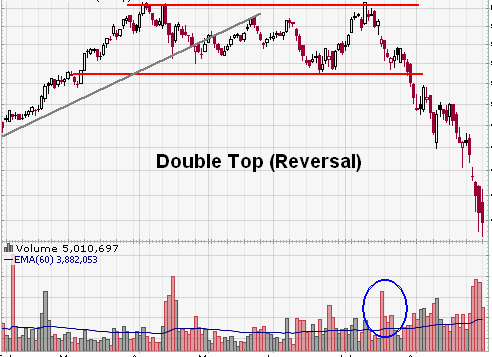 The double top pattern forms when the stock/index makes two consecutive peaks virtually on the same level and there is a formation of a 'V' shape between the two peaks. A double top pattern is a reversal pattern. In most cases, it is assumed that once the second peak is formed the price will take a steep fall from that point. When the price goes down from the second peak it takes support at the lower level. Though the pattern is not complete till the support level is broken at the lower level on the back of increased volumes. 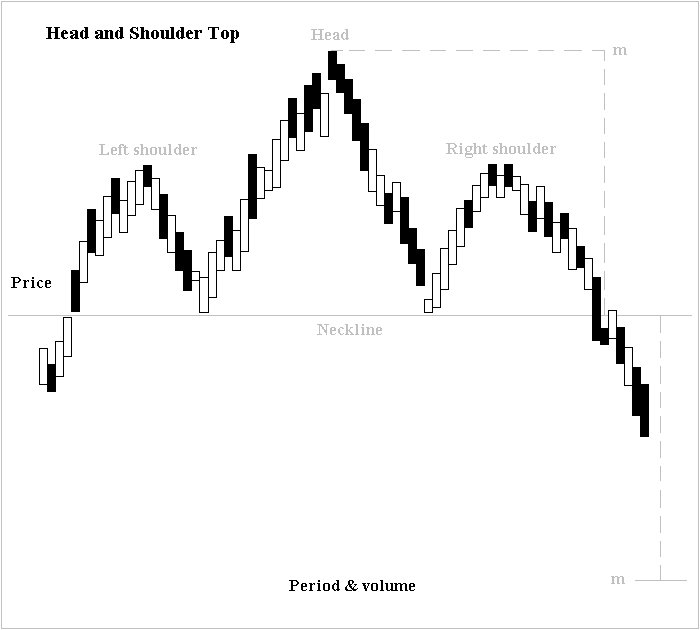 A Head and Shoulders pattern happens in an uptrend, the pattern's completion is marked as trend reversal. This pattern consists of three consecutive peaks. Amongst these three, the middle peak, known as the head, stands tallest while the two peaks (shoulders) on either side, are low and mostly on the equal level. The confirmation of pattern can be considered when the reaction lows of all the peaks can be connected on the same level. This level is called a neckline. 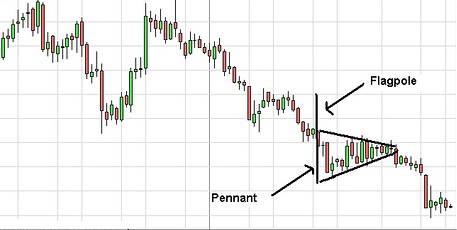 Flag pattern is a short-term continuation pattern. The formation of the pattern starts with a small consolidation before the price starts moving in the direction it was moving in before consolidation. Generally, this pattern is preceded by a marked hike or decline in high volume, and mark a midpoint of the move. When you draw tradelines around all the closing and opening points you get a see a shape of a flag or a pennant. 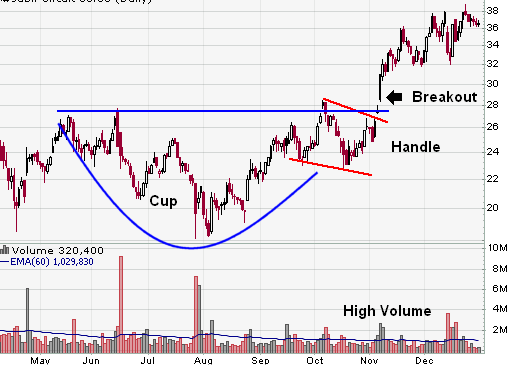 The Cup with Handle is a bullish continuation pattern. This pattern marks a consolidation of a price action which is followed by a breakout. As the name suggests, the pattern forms a shape of the cup and the handle. The shape of the cup formed after an advance and takes a rounded bottom shaped bowl. Once the cup is completed, the handle gets formed as the trading range develops on the right-hand side. At the end of the pattern, a breakout from the handle's trading range signals a continuation of the prior trend.

There are various other chart patterns like a Falling Wedge, Rising Wedge, Symmetrical Triangle, Rectangle, which are used by traders.

Importance of Volume - All the chart and candlestick patterns are only confirmed when the share price movement happens on the back of considerable hike in the volumes. This is the condition for confirming all the patterns.

RSI analyses the degree of recent gains to recent losses to understand if the stock is oversold or overbought. RSI is measured on a scale of 0-100. Usually, if it is above 70, it is considered that the stock is overbought so the trader can initiate sell on it. Likewise, when RSI is less than 30, it means the stock is oversold, therefore can be bought. RSI like moving averages is the most widely used indicators. Professional traders always have RSI indicator on their screens. The reason is that RSI gives near a perfect indication of increasing and decreasing strength in the stock which is a vital information to take entry-exit calls.

Technical analysis, as I said above, is a never-ending subject. To get better at technical analysis one has to be vigilant while watching the charts. There are various indicators and oscillators available which come in handy but they are not entirely reliable. The success of a technical analyst lies in building a skill set which sees the trend forming little ahead of others and taking action accordingly. It is easier said than done but with practice one can have complete command on charts. That is the reason it is important to engage in regular practice of reading charts and building your trade ideas in the live market and backtesting them before executing. 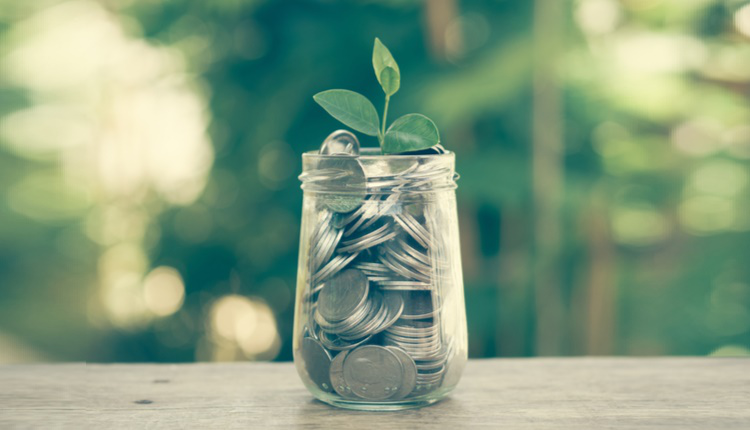 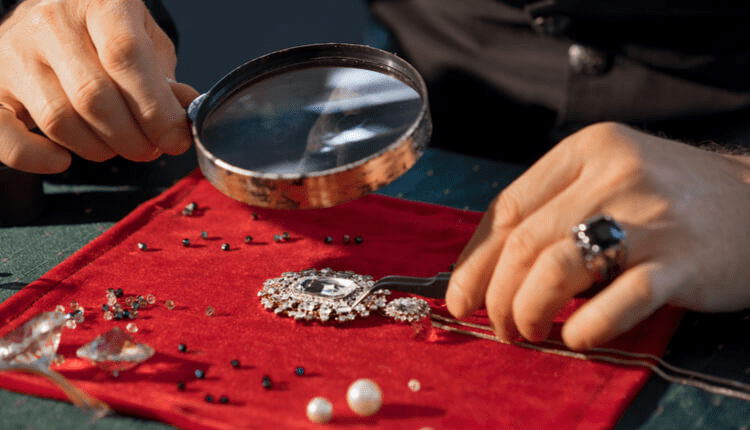 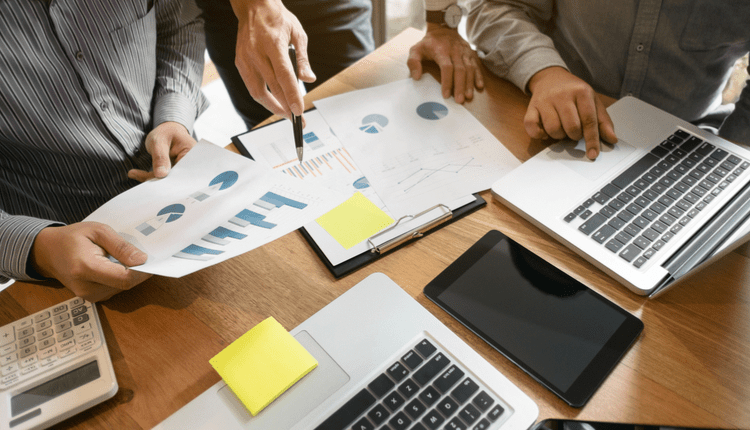